Your first online source for everything Billie Lourd

No comments
by Ann

Actor Billie Lourd—who is known for her roles in Scream Queens, American Horror Story, and Booksmart as well as for being the daughter of actor Carrie Fisher and power agent Bryan Lourd, not to mention the only grandchild of Hollywood royalty Debbie Reynolds and Eddie Fisher—met producer Austen Rydell back in January of 2011 while they were both attending NYU. Austen proposed in June of 2020 (according to his Instagram engagement announcement, Billie said “duh!” instead of “yes” when he popped the question), and their son, Kingston Fisher Lourd Rydell, was born in September.

The couple’s wedding took place this past weekend in Cabo San Lucas, and the two worked with planner Mark Seed to bring their vision to life. Festivities kicked off with a floral-Friday-themed rehearsal dinner. “I am a little bit of a procrastinator, so I didn’t start looking for my rehearsal-dinner dress until late January,” Billie admits. “I’ve always loved Oscar de la Renta’s floral designs, so I went to the store to find a white floral gown. When I arrived, they asked me when my wedding was, and I confidently replied, ‘March!’ They looked at me quizzically and said, ‘2023?’ I didn’t realize people started planning for this whole wedding thing over a year in advance and awkwardly smiled, ‘2022…’ The saleswoman smiled and told me most of their dresses are custom and take at least six months to make, but she would see if they happened to have anything in stock in my size. She went in the back and then came out with my absolute dream floral-Friday dress—a floor-length gown with flowers delicately embroidered all over it. I hit the jackpot. I decided to hem it short in the front and long in the back, and it turned out incredible.”

“I have always been a massive fan of their work and thought their elegant, ethereal, unique style was a perfect fit” – Billie Lourd

For the ceremony on Saturday, the bride wore a custom off-the-shoulder Rodarte dress. “I discovered Kate and Laura [Mulleavy, Rodarte’s designers] after they interviewed my mom for an article in 2014 and immediately fell in love,” Billie says. “So when I started thinking about who I wanted to design my wedding dress, they were the first people who came to mind. I have always been a massive fan of their work and thought their elegant, ethereal, unique style was a perfect fit for my—kind of—elegant, ethereal, unique personality. I also felt a strong connection to them because of their connection to my mom and because they are California gals just like me!”

Billie Lourd’s incredible wedding dress
Billie went to the Rodarte studio in downtown L.A. to begin the design process and quickly fell in love with what would ultimately become her dress. “The first dress they brought out for me to try on turned out to be exactly what I wanted—every gal’s dream!” she says. The only thing that needed to be changed was the color, as the original dress was green and Billie envisioned herself in classic bridal white.

“We got married on the beach at sunset, so I really wanted something that reflected the vibe of the ocean-y setting,” she says. “We decided to make the underlayer of the dress out of sequins. The underlayer of my personality is also made of sequins, so it just felt right,” she jokes. “The dress came out even better than I could’ve ever imagined, and I feel so beyond grateful to Laura and Kate for making it all happen.”

A team of friends
Michelle Ceglia did the bride’s hair, and Eryn Kruger Mekash was on makeup. “I have worked with Eryn since Scream Queens season one in 2015 and Michelle since American Horror Story: Cult in 2017, so getting to have two women I know and love so much with me at my wedding was just incredible.”

For jewelry, Billie wore her engagement ring—a diamond that was originally in the ring that her dad proposed to her mom with and that Austen had reset. She also wore a pair of vintage Neil Lane diamond studs that her dad gave her (something old); her mom’s favorite ring, a blue fire opal that she wore all of the time (something blue); and a ring that her mom had given to one of her closest friends (something borrowed).

The bride’s shoes were made by René Mancini and completed her wedding-day look. “My dad was walking around town shopping and came upon the store and found the perfect shoe,” Billie explains. “They reminded him of the shoes my mom used to wear in the ’90s. But he had the same experience I had with my rehearsal-dinner dress. It was a month before the wedding, and they told him they take four months to make the shoes. He talked to Mohamad, the manager of the store, and told him when the wedding was and asked him if he could somehow rush them, and he magically made it happen! When he came to pick up the shoes, it turned out my dad’s hunch about my mom was right. Mohamad told him that my mom used to shop at their store in New York City in the ’90s. The perfect shoe turned out to literally be the perfect shoe. It was serendipity!”

Austen opted for a Tom Ford tuxedo, and all of Billie’s best friends were in Halston.

The ceremony was intimate, with just family and the closest of friends in attendance. “We wrote our own vows and sobbed the entire time,” Billie says. “Word to the wise—always wear waterproof everything!”

“It was magical. I could not have dreamed up a more perfect wedding.” – Billie Lourd

Her mother’s two best friends Gavin DeBecker and Bruce Wagner officiated. “It was the most hysterically brilliant and touching officiating in the history of officiating,” Billie says. “And in true Carrie fashion, we threw glitter in the air at the end of the ceremony. It was magical. I could not have dreamed up a more perfect wedding.”

After the ceremony, Billie changed into an after-party look, also by Rodarte. “It was inspired by my glam-ma Debbie Reynolds’s iconic dance outfits that she used to wear in all of her shows and is probably the most fun party outfit of all time,” Billie says. “I am obsessed beyond belief. I’m probably going to make it into an art piece in my house because it’s way too legendary to just hang on a hanger in a closet. I have never had more fun in any dress ever!”

Gif of the Moment 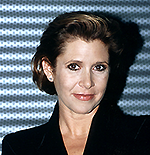 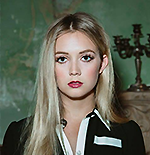 Billie Lourd Network at billie-lourd.com is an unofficial fansite. We have no contact with Billie, her friends, her family, representatives, etc. This site is made by fans for the fans. All images in the gallery belong to their respectful owners and no copyright infringement is intended. All content and graphics are copyrighted to SAK unless otherwise noted.

© 2015 Billie Lourd Network | Hosted by Flaunt Network | Privacy Policy | DMCA
Theme by Sin21 | Header by Ann | Back to top | Home
Billie Lourd Network at billie-lourd.com is an unofficial fansite.
We have no contact with Billie, her friends, her family, representatives, etc. This site is made by fans for the fans. All images in the gallery belong to their respectful owners and no copyright infringement is intended. All content and graphics are copyrighted to SAK unless otherwise noted.